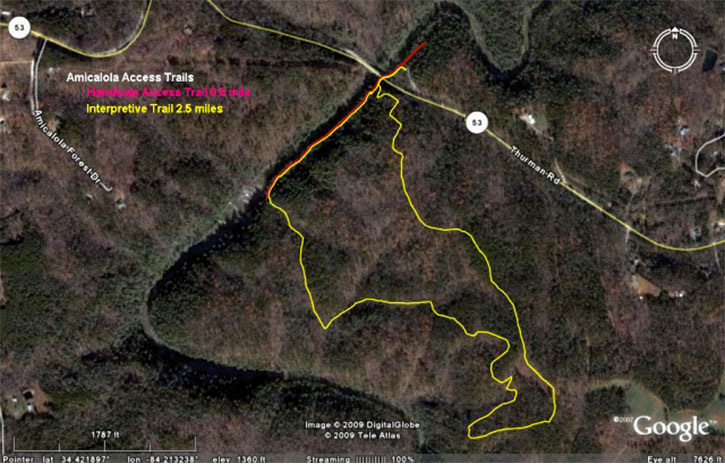 The Amicalola Tract is about 10,000 acres. It provides a conservation buffer for the scenic Amicalola River. The Amicalola River drains the watersheds of the Wildcat and Glass Mt. Tracts as well as parts of the Amicalola Mt. Region. It also has numerous 2nd and 3rd order streams joining the river from northern Dawson County lowlands.

The Amicalola Tract, for the most part, is kept in its natural state. There are numerous entrances to the tract to allow access for hunting and fishing. Within the tract are two multiuse recreational sites, the Lindsey Ford and the Amicalola River Access site. These areas are used for fishing including handicap access, camping, watercraft activities including class 3 rapids training for kayakers, hiking, and more.

Access
The Amicalola River Access site in the Dawson Forest is located on Rt.53 in Dawson County. The site is where the Amicalola River goes under the Rt. 53 Bridge. There is a parking lot on the north side of the bridge. Entrance to the Interpretive Trail and Handicap Access Trail is located in the upper parking lot for most hikers. From the parking lot follow the steps down to the trail. For handicap persons, there is lower parking located off of the access road to the right of the main parking lot where cars with handicap stickers can park to gain access to the trail.

Site Features
This site has been developed for multiple recreational uses. The site has a river watercraft (canoe/kayak/rubber raft) launching and retrieval location in the handicap parking area below the main parking area. Also located in this area are the handicap fishing sites.

Located ½ mile to the south of the parking lot is the End of the World Rapids that are used by kayakers to practice and train on a Class 3 Rapids.

Amicalola River Access Loop and Interpretive Trail 2.5 Mile (Yellow)
The Amicalola Interpretive Trail begins in the parking lot on the north side of Rt.53. Enter the trail going down the steps off of the parking lot to where the trail joins the raised wooden handicap access trail coming south from the handicap parking lot. Turn left and follow the raised wooden platform trail south crossing a footbridge and then goes under the bridge heading south along the Amicalola River.

Approximately, 100 yards south of the bridge along the river, you can see the old foundation for the circa 1860 covered bridge that crossed at this location.

Continue south along the trail until you reach the observation platform at the End of the Wolrd Rapids. The handicap portion of the trail now ends and the trail splits. The right fork goes another 75 ft to a place where you can access the river on the rocks to watch the kayakers practice going through the rapids.

The left fork of the trail is the Interpretive Trail. You are now heading southeast along the trail that meanders through a heavily vegetative section of the forest. Along the trail are interpretive signs for your information. The trail heads mostly south and east for approximately two miles until it junctions with an old roadbed (Dove Rd). At the junction with the road, the trail turns left and follows the road for a very short distance where it turns left again heading through an area the has been logged out.

Amicalola Handicap Access Trail 0.5 Mile (Red)
The Handicap Access Trail begins at the handicap parking lot near the river and handicap fishing site. The handicap trail has been built to American Disability Act (ADA) standards and can accommodate wheelchairs for the entire 0.5 miles of the trail. The trail is a four ft wide raised wooden platform trail. It has pull-off sites every 200 ft with a bench for resting. At the end of the trail near the End of the World Rapids, there is a large observation platform for people to rest and watch the water spill over the rapids.